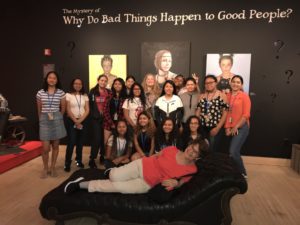 Founded in 2013 by Leonor Blum, an Argentine immigrant and Professor Emerita at Notre Dame of Maryland University, this three-year community-based college access program focuses on bright, academically driven Baltimore City 10th-12th grade Latinas, began with 12 sophomores and has added a new sophomore cohort each fall.  Now in its ninth year, the program serves 35 students, has graduated 6 cohorts with most of our graduates currently enrolled in college and supports its 50 alumnae.

¡Adelante Latina! has been awarded prizes from the Latino Providers Network, the Ole! Group at Exelon, and was a 2018 finalist for the National Excelencia in Education Award.  In 2019, Leonor Blum was named as one of five Baltimore Homecoming Heroes in recognition of her work making a difference in the lives of Baltimore City Latinas.  In 2020, she received a statewide award from Maryland AARP for intergenerational cooperation in recognition of the program’s tutoring program which engages many retirees.

We're not around right now. But you can send us an email and we'll get back to you, asap.